Even now, I cannot fathom the next words I will be typing…. I’VE BEEN TO NEW YORK! 🙂 Oh.my.heart. I am officially in love with the city. One cannot erase what you’ve seen and experience.

So to start telling my story… Undoubtedly, we land in JFK Airport from LAX.

We boarded an airtrain from JFK Airport. An airtrain links you to the MTA New York City buses and subways which will basically take you all around the city. We spent $8.00 for the card. After alighting from the airtrain, we boarded an MTA train again to go to our Airbnb. 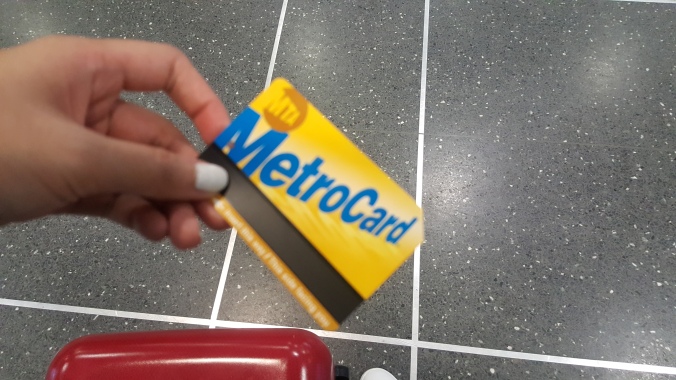 It was a Sunday when we arrive but we were so hungry. It was raining and it’s 9 degree Celsius.

So we decided to eat first at Starbucks and head for mass. Can you guess where? …. SAINT PATRICK’S CATHEDRAL 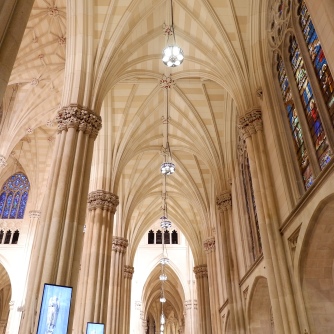 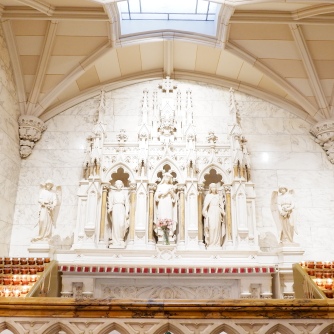 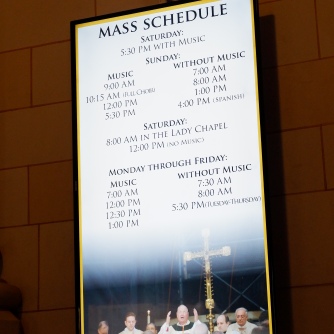 It is decorated with Neo-Gothic style. It is the seat of the archbishop of NY located on the east side of Fifth Ave between 50th and 51st streets in midtown manhattan, directly across from Rockefeller Center.

The church was majestic. It looked so classic an vintage and elite all at the same time. The carvings were carefully done and very intricate.

And, since I’ve mentioned awhile ago that the cathedral is across from Rockefeller Center… 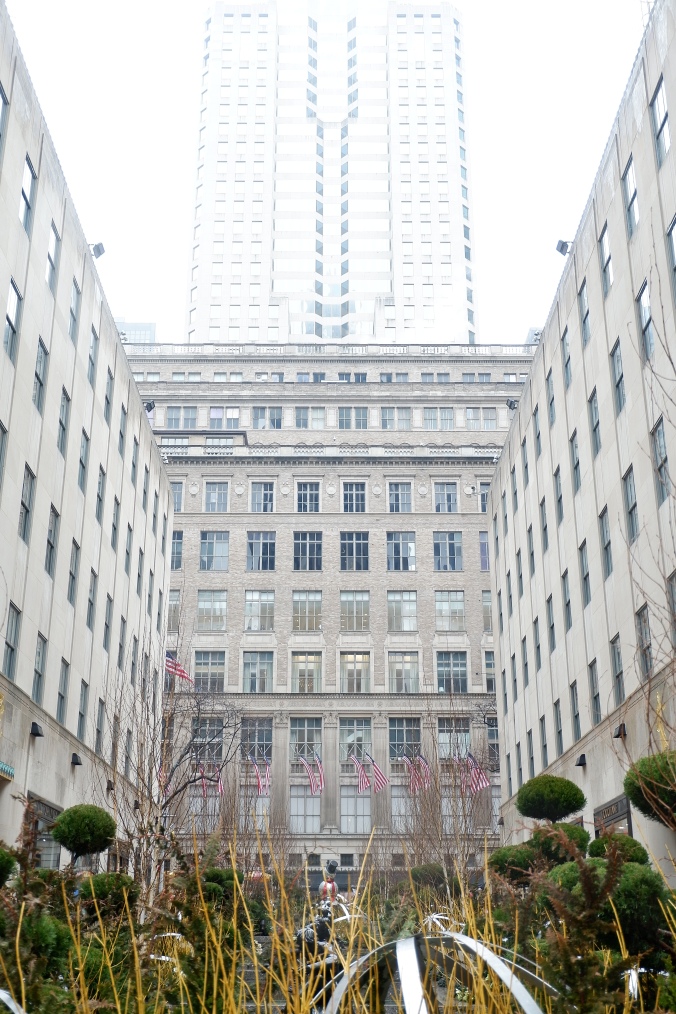 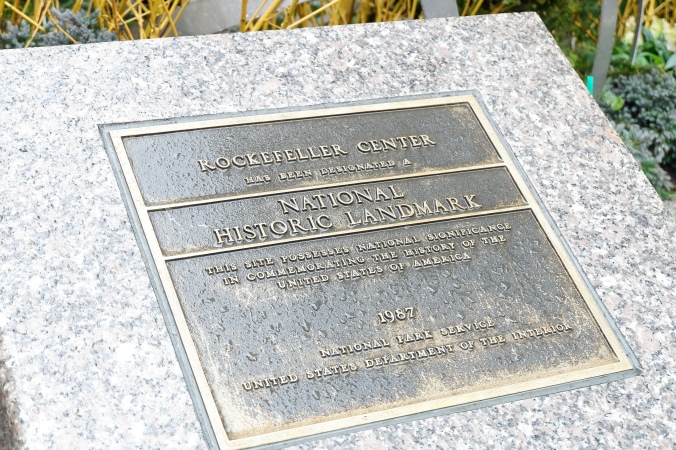 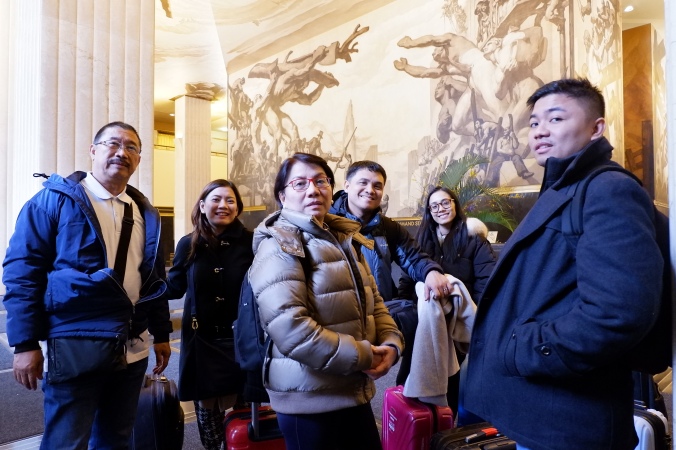 Also one of the most famous landmarks in NYC, it’s running on 22 acres that features 19 commercial buildings. It is also a popular destination for all the events happening in the city. Do you remember the Home Alone 2 scene where Kevin McCallister is standing infront of a giant christmas tree and wishing for his family to return? well, that’s where this is. The famous lighting of the Christmas Tree every year that is being aired all over the world? It’s here. You can actually also go up, TOP OF THE ROCK where you can see the skyline of the city. But for us, we didn’t go there since we will be doing that at the Empire State Building — which is due for another post.

So after we’re settled in our Airbnb, which is at Upper East Side (well, hello elites), we head out for some lunch. and since we were dead tired from all the walking, we decided to stop by the nearest restaurant we could find from where our Airbnb is. It left us with… trying our first and last NYC Pizza. 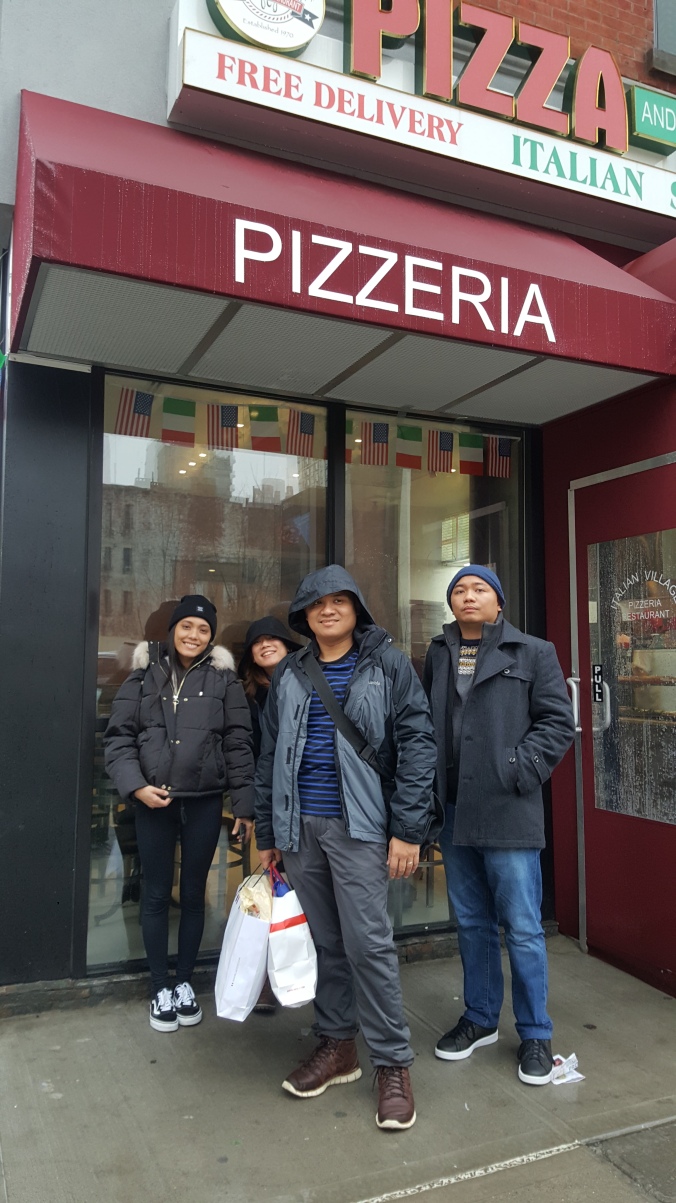 It’s a self service restaurant with pizza pans lined in front of the counter so you can choose what flavor you like. And I tell you, 1 slice is enough for 1 or 2 persons! 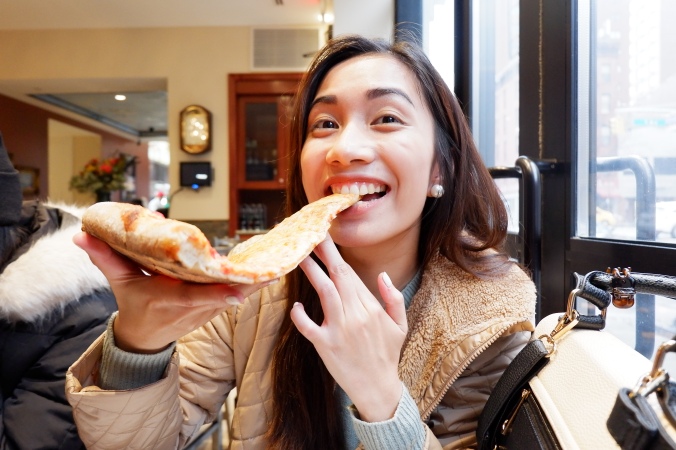 After our late lunch.. we head to THE MET  and ohmygod. Who here watches Gossip Girl and their famous MET Steps? and only the coolest and most IT girls are allowed to seat at THE steps. Haha. (Feeding my college heart with Gossip Girl Achievements! ❤ )

Even the streets leading to the museum is Insta-worthy. When we were walking to the museum, we could see there were 2 V-E-R-Y long lines on each end where the entrance is. BUT, BUT, but.. the lines move pretty quickly! so, don’t fret. Though, I suggest you go in the morning so you can take a look around more. The museum is huge. 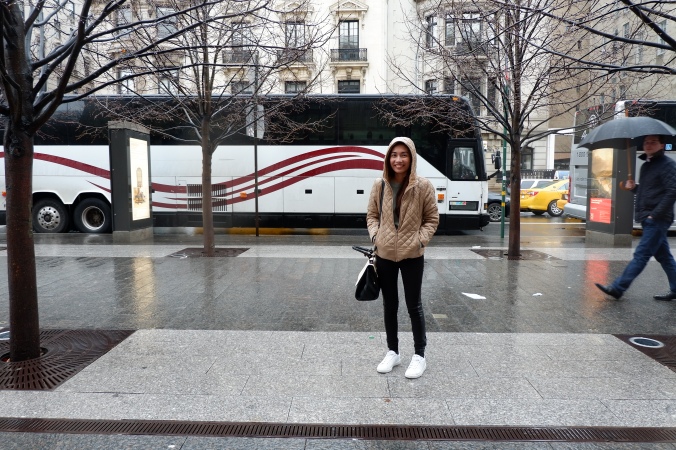 So, I have to tell you that once you’re inside — you’ll be overwhelmed with how much people are there in the lobby trying to get in line to get a ticket! But here’s the deal: my brother found a machine where you can buy your tickets. The suggested price is $20.00 so that’s what we paid for.

So, my favorite part of the museum is… the one with all the God Statues. 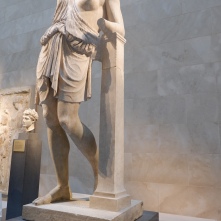 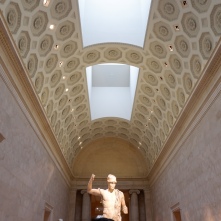 Some of the other parts of the museum… 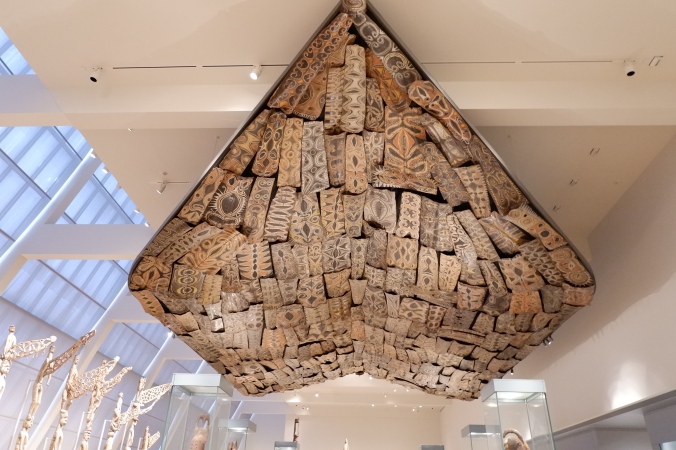 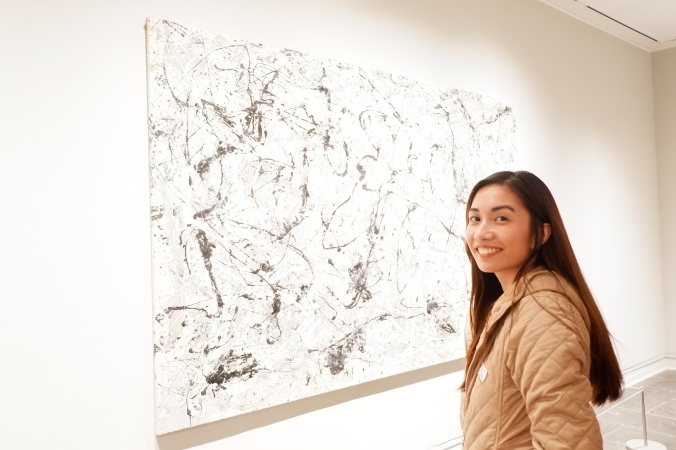 After hours of looking at everything spectacular, we uber-red back to Airbnb and went to K-TOWN .  We ate at KANG HO DONG BAEKJONG in K-Town which received a two thumbs up from Anthony Bourdain.

I don’t exactly know what we ordered but everything was good. All korean food is G-DOUBLE O -D Good. After a festive dinner, we head to the very lit and eye poppin TIMES SQUARE 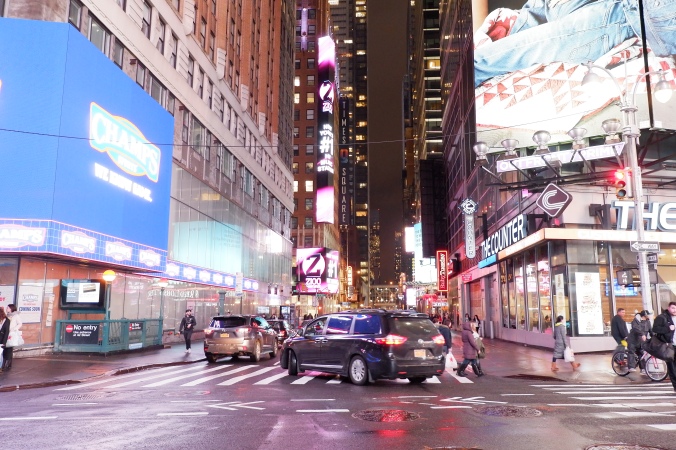 Everything is so colorful and bright and sunny and alive and active… This is why the city absolutely never sleeps. There are random people performing, friends having a night out and just-all-sorts-of-people. ❤

Okay! So you I know you’ve seen the M&M Store in facebook right? and the Hershey’s Store where all the giant chocolates are? We went there! 😀 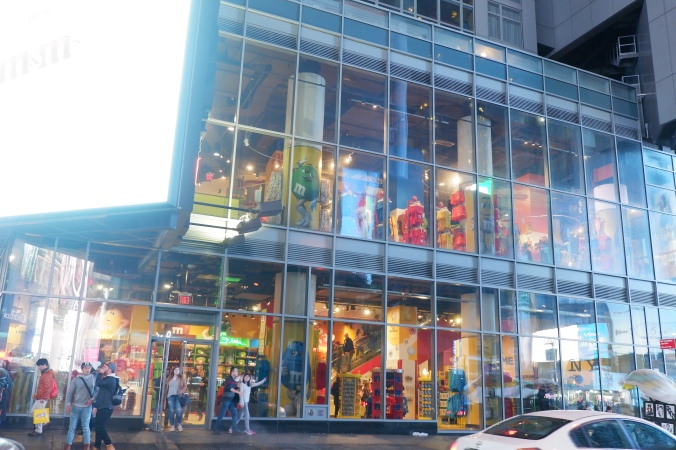 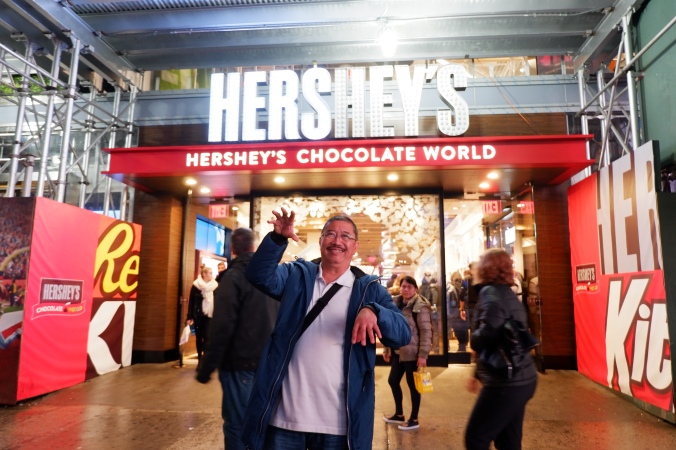 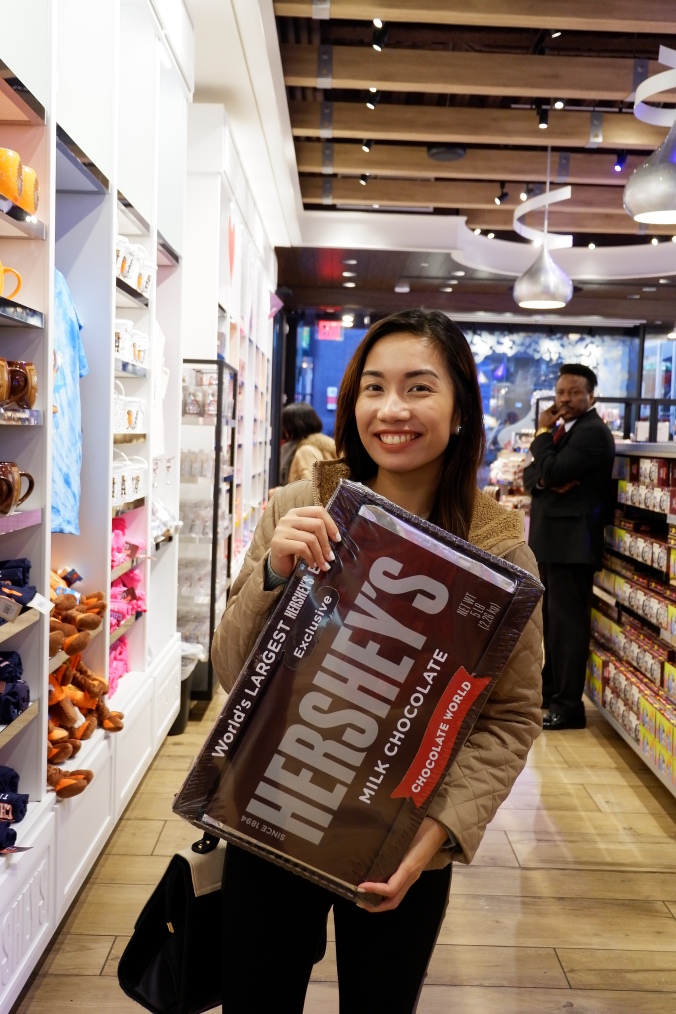 I swear I loved New York on Day 1!

It’s funny how I came across this new place a BF. I was following this girl in Instagram because of her doodles, and she kept on posting photos at this place she was in. I was intrigued so I followed another person not knowing that she was the Business Partner of the place. Anyway, We went here a couple of weeks ago to try it but then there should be a reservation beforehand so we weren’t able to push through with our dinner. 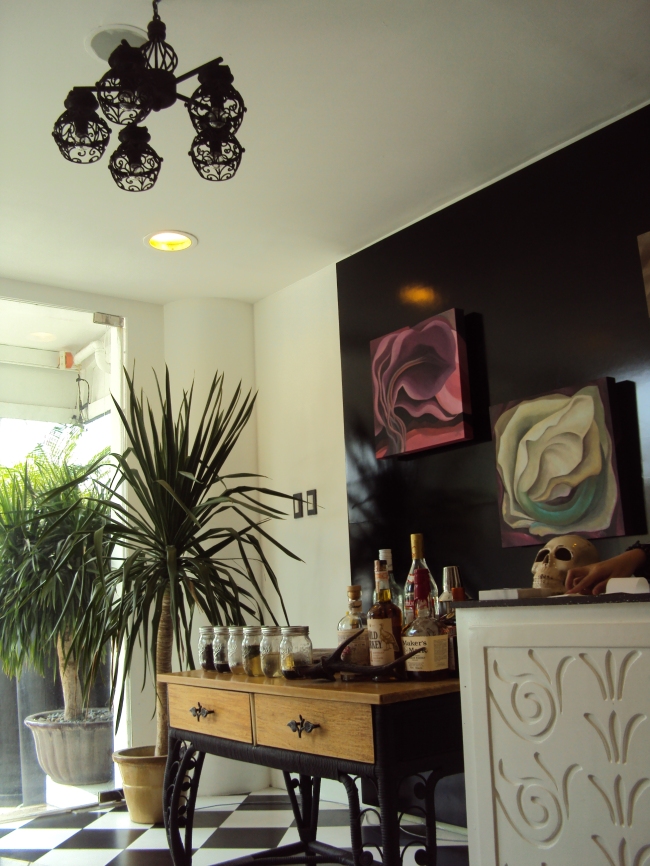 A table that serves as their bar welcomes you on the front door. When you order a drink, they will mix it in front of you. They also have a Mini Front Desk.

On the left, you will also notice beautifully printed photos hanging on the wall. The photos are shot by the Owner himself. 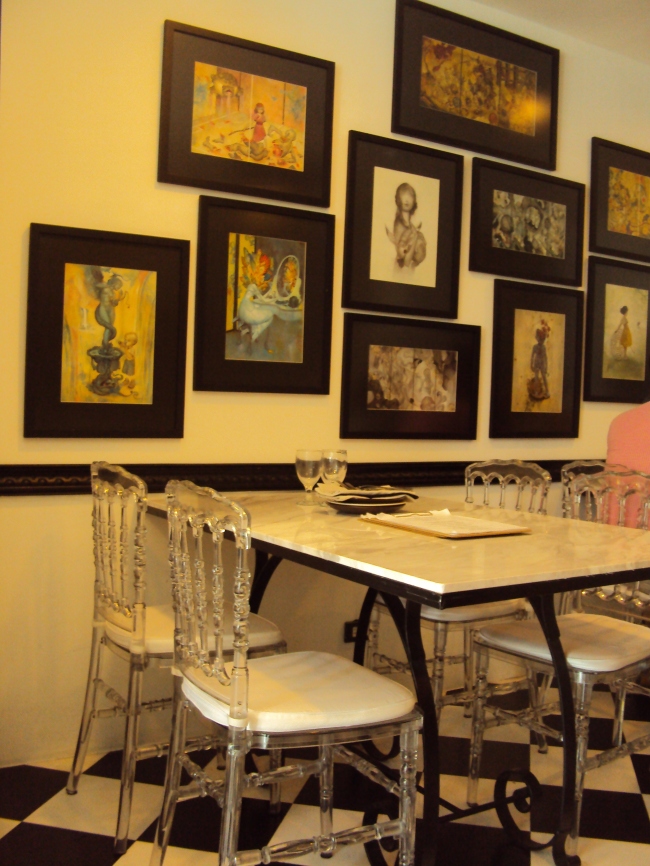 The restaurant is filled with paintings and they have glass chairs. 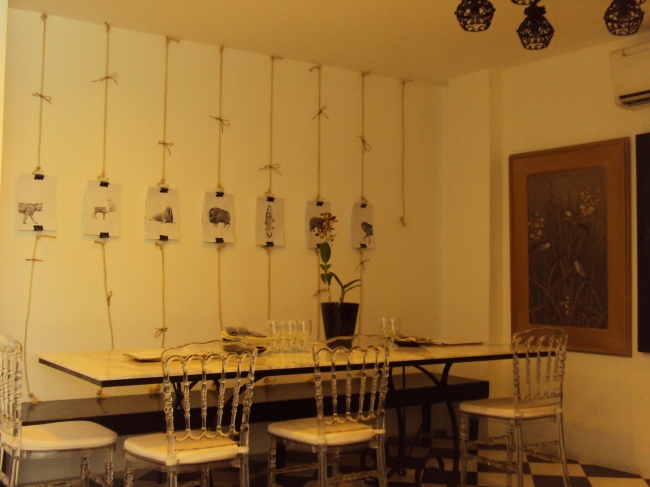 Everything seems to be Picture Perfect.

The Table Set up. 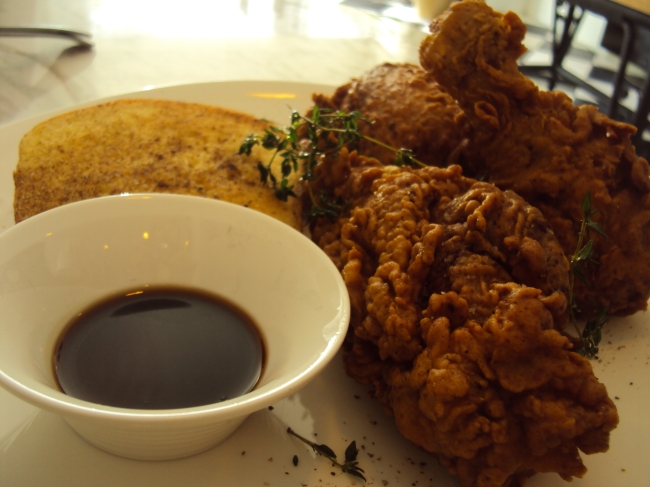 Signature Dish – Buttermilk Fried Chicken with French Toast (Php 410) This is only available during Saturdays and they say that they marinate the chicken for 24 hours. The Chicken was so crispy and juicy. But I didn’t find anything so unique that this be thier Signature Dish aside from being crispy. It also comes with a French Toast and a Balsamic Vinegar.

Korean BBQ Rib Eye with Kimchi Fried Rice (Php 450) I never liked Kimchi but this was bearable. In fact, it was good. The Beef was good too. It was tender but not something that’ll melt in your mouth. I will recommend this.

Home Made Faux Twix with Sea Salt (Php 160) This is definitely angels in heaven singing inside your mouth. It was everything good all at once. I highly recommend this dessert. Make sure you make room for this.

My Forever Partner knows how much I love trying out New Restaurants – especially the ones that are hidden from all the Mad Crowds.

Tucked in one street near Greenhills Shopping Center is Angel’s Kitchen. 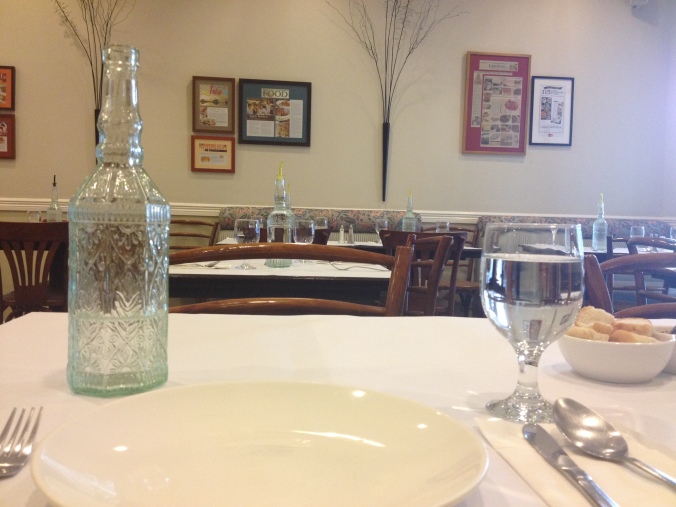 The lovely set of their table. – The Angel’s Kitchen’s Romantic Water Bottle.

Melba Chips with Chicken Pate – The Chicken Pate was awfully good. It’s something – for a free appetizer? Definitely good.

The ambiance was homey. It was simple – far from extravagant but the lovely water bottles makes it look like you’re about to be served an expensive wine.

Pinakbet Rice with Lechon Kawali and Bagoong with Chocolate (Php 388) – All the ingredients were common like others. Though, it was full of flavour and the rice wasn’t dry. The Lechon Kawali had large cuts, so nothing to worry there.All in all? The Signature Dish was more than good, I would say. 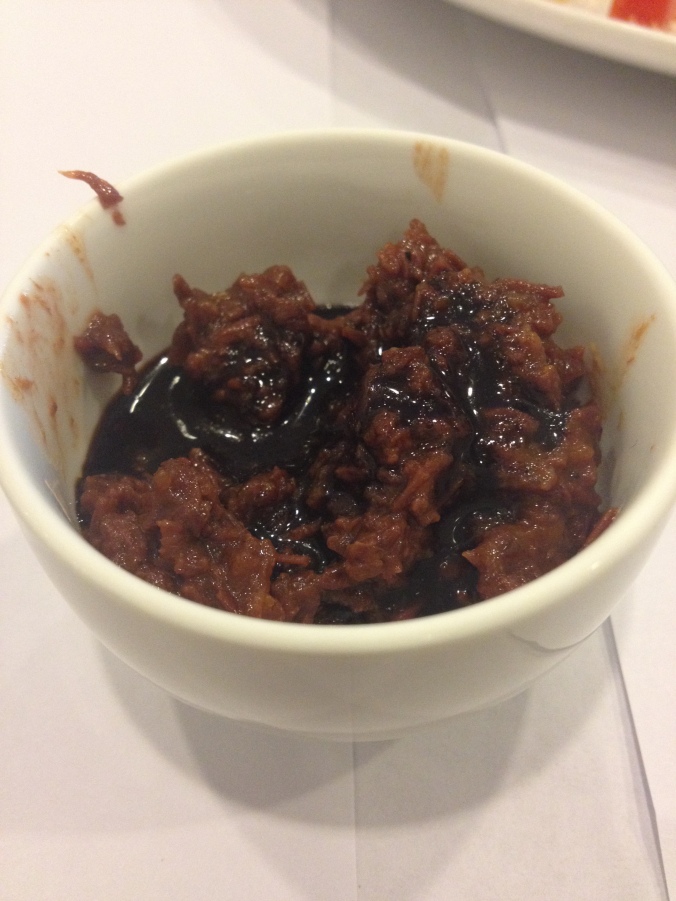 The Chocolate was poured on top of the Bagoong though the saltiness overpowered the chocolate so it tasted nothing but what a Bagoong would taste like. 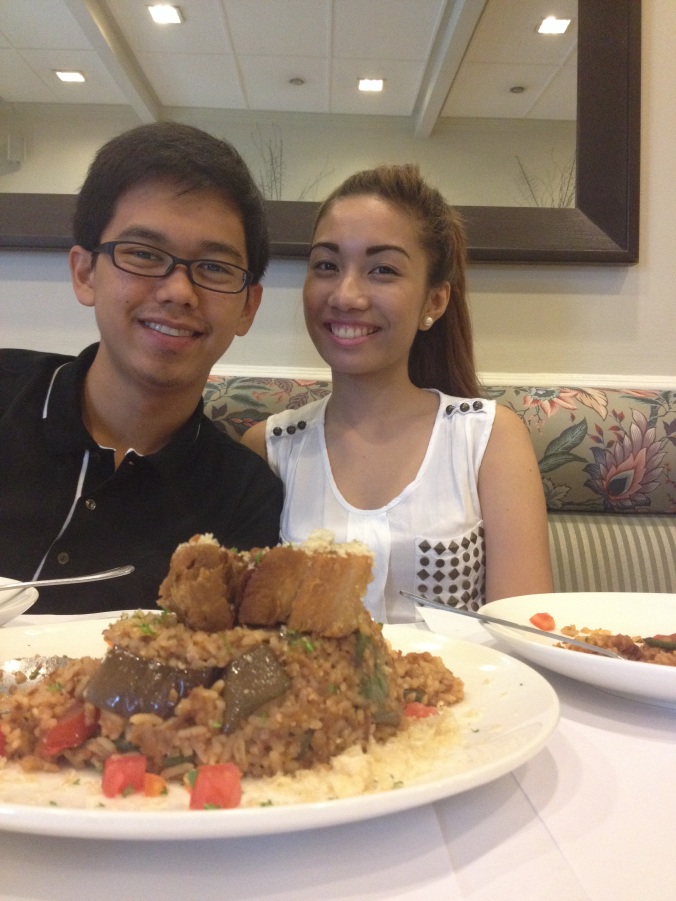 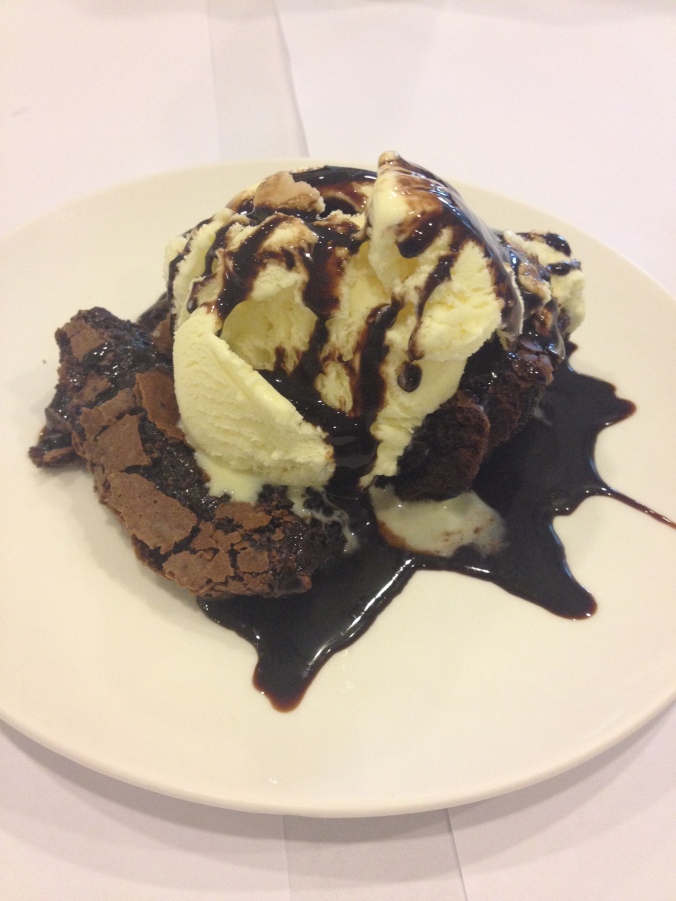 The Choco Lava – A very Moist, at the peak of baking melted brownies topped with Vanilla Icecream with Chocolate Syrups. WHOAAHH.

P.S. They also have Carmen’s Best Icecreams. And yes, My date will bring me here again. 🙂 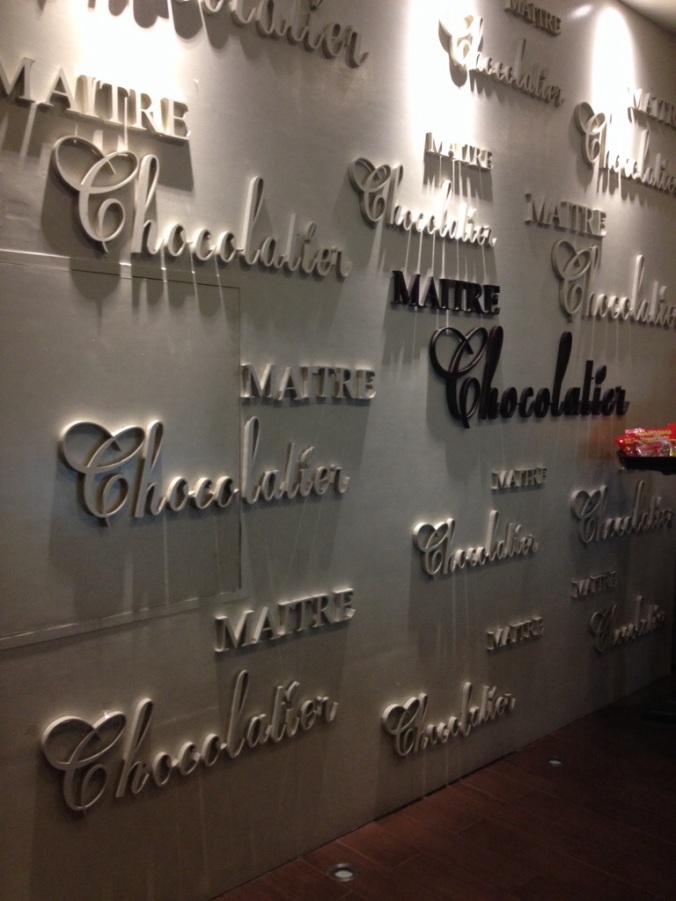 Food haven for all the chocolate fanatics!

though love picked to be seated outside.

My love surprised me with my I love You icecream.(((: Thank you babe.
What Jude picked to be his tooth enemy – Ferrero Rocher, Chocolate Mint and Tiramisu.

Because my friend, betsy was asking me to teach her how to make cupcakes, I got my old culinary book again.:D and decided to reinvent the carrot cupcake recipe I had and go with banana. 🙂 PLUS, PLUS Chocolate. 😀 — just because I want everything with chocolate.

1 tsp cinnamon. — actually, I used more than 1 tsp. I just like the smell of it but honestly, I can never tell the taste.

3 bananas – this also depends on you.:D

and lastly, the best part.

1 cup of chocolate. – you may not buy the liquid one. just buy the bar and melt it. – its cheaper.

1. Mix the wet first. and make a fold. — make a well using the dry ingredients and place the wet one in the middle. make a fold. 🙂

Before I placed it in the oven. Bake it for 20 to 25 minutes. and check it by placing a toothipick or a fork at the center. 🙂

You have to remove it in the oven when it’s still a little wet so as not to have a dry cake,. 😀

Pot, Judeyy gave me this!! He had been telling me what his favorite chocolates are, and I have never tasted them before so, he gave me this! GALAXY. – which tasted just like dairy milk. Ha-ha. but he protested.