I’ve read this when I was in first year college and noticed that it’s not in here so I re-read it again. No problem, always a good read..

Mitch has an enchanting way to draw you in, make you feel guilty, teach you about life and make you crawl inside a cave, listen to your thoughts and come out of it renewed and feeling like you know so much about life.

Goodreads: ‘Eddie is a wounded war veteran, an old man who has lived, in his mind, an uninspired life. His job is fixing rides at a seaside amusement park. On his 83rd birthday, a tragic accident kills him as he tries to save a little girl from a falling cart. He awakes in the afterlife, where he learns that heaven is not a destination. It’s a place where your life is explained to you by five people, some of whom you knew, others who may have been strangers. One by one, from childhood to soldier to old age, Eddie’s five people revisit their connections to him on earth, illuminating the mysteries of his “meaningless” life, and revealing the haunting secret behind the eternal question: “Why was I here?”‘
The succeeding lines will reveal everything about the book. So if you’re planning to read it blind, please skip this post as this will be a serious spoiler. 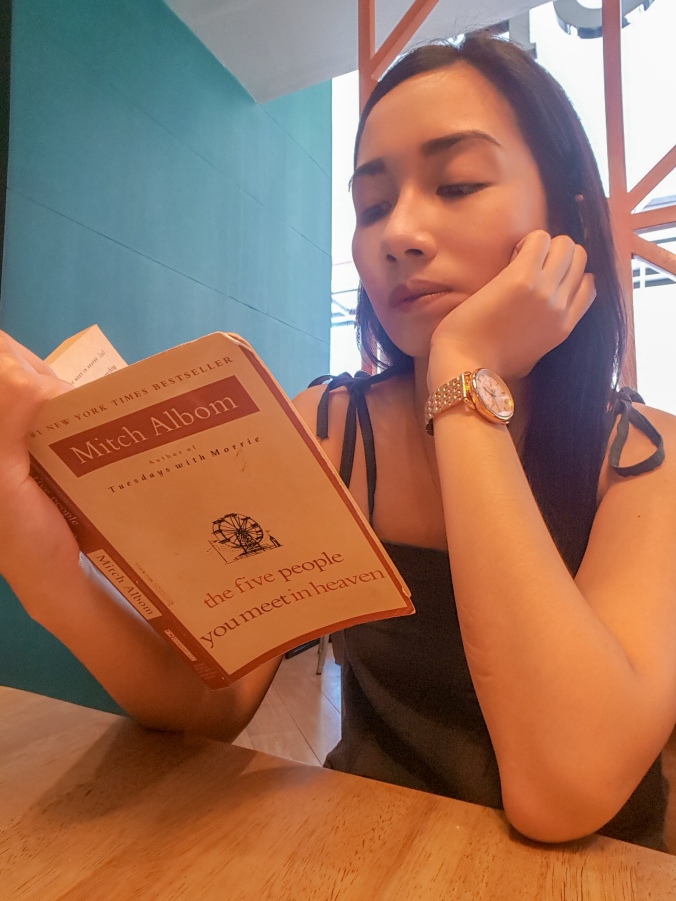 The Five People he meets in heaven and why:
1. The Blue Man
The Blue Man was not in Eddie’s life, only in passing. Let me first explain why he’s named such. As obvious as it can be, he simple has a blue ash skin. When he was a kid — he overdosed on silver nitrate and as a side effect, gave him a blue skin. As he got older, his only escape in life is to be with the other freaks, the unique people — in the freak show of Ruby Pier.
He’s connected with Eddie because when eddie was a kid and playing ball, the blue man had a car accident because he tried to avoid hitting the kid on the street. Eddie was the kid.
Blue Man Lesson: There are no random acts. That we are all onnected. That you can no mmore separate one life from another.Fairness does not govern life and death. All lives intersect. Death doesn’t just take someone, it misses someone else, and in the small distance between being taken and being missed, lives are changed. Strangers are just family you have yet to come to know. No life is a waste. The only time we waste is the time we spend thinking we are alone.
2. The Captain
The captain was Eddie’s commanding officer when joined the army and went to war. Eddie was captured together with 4 other soldiers and the captain in the Philippines. They suffered and witnessed so many things together. On the day of their escape, the captain shot Eddie’s leg to save him from the burning nipa hut.
The Captain Lesson: Dying? not the end of everything. But what happens on earth is only the beginning. Sacrifice is a part of life. It’s not something to regret. It’s something to aspire to. That’s the thing. Sometimes when you sacrifice something, you’re not really losing it. You’re just passing it on to someone else.
3. Ruby
Ruby was a stunningly beautiful waitress back in the day. She captured a lot of hearts but she was bound to marry Emile. Emile was the founder of Ruby Pier. But one day, the park was engulfed with fire and the trauma haunted Emile and his wifef, affecting their lives. Emile and Eddie’s father shared the same hospital room. Ruby explained the death of his father.
Ruby Lesson: Things that happen before you are born still affect you. Holding anger is a poison. Hatred is a curved blade. The harm we do, we do to ourselves.
4. Marguerite
Marguerite is Eddie’s puppy love, wife, one true love, best friend and everything good about his life is her. They met and danced at the park. She waited for him when he was at war. They got married but never had children. After the war, Eddie is a changed man. One night, they fought and Marguerite was in a car accident on her way to see Eddie and apologize to him.
Marguerite Lesson: Lost love is still love. Life has to end, love doesn’t.
5. Tala
Tala was the little girl hiding during the war. On the day she hid inside a nipa hut, the four soldiers, Eddie and the captain escaped. As part of their plan, they burned the nipa hut, not knowing there was a little girl inside the hut.
Tala Lesson: Everything that we do has a reason. We are all bound to do good on this earth. Eddie was miserable all his life because he thought that his life was so useless, doing the same thing everyday, checking the rides, making sure it was safe. Tala taught him that although he accidentally killed her during the war, he was doing good by keeping people safe. We often neglect our purpose in life, but those little things means a lot if we only appreciate and look at the bigger picture.
And soon, Eddie will also be someone else’s second, third, fourth or fifth person in heaven.
Each affects the other and the other affects the nexxt, and the world s full of stories, but the stories are all one.